The biggest match of the season to date takes place at Ellem Oval on Saturday when the Grafton Tigers take on the Sawtell Toormina Saints.

Could this be a preview of the Grand Final? On current form, the answer is yes.

These teams have met twice this season which resulted in an 11 point win to the Tigers and a draw. That’s a fair indication of just how evenly matched the two line-ups are and gives a great indication that Saturday’s match could well be a nail biter.

A win for the Tigers would see them steal a handy break at the top of the ladder. A win for the Saints, and the top positions are reversed.

The other match in the Senior grade pits Port Macquarie Magpies against the Coffs Harbour Breakers in an encounter that can potentially be as significant.

Both of last season’s Grand Final combatants are enduring a lean season and find themselves in desperate need of a win to inch closer to a place in the Finals. A loss on Saturday won’t be terminal for either team, but a win for the Breakers will see them open a gap over their rival, while a win for Port would see them draw level on the ladder and add real spice to the race for third place.

Port are at home which should represent an advantage, especially in ensuring they have their strongest team available. However both of Breakers victories to date have come against Port, including a win on the road, so the trip south won’t be daunting for the Coffs team.

In the Women’s match, Sawtell Toormina Saints are at home to Northern Beaches Blues.

The teams have met three times this season with the Blues holding the advantage in the head to head victory count. Sawtell’s win came in round one but the Blues have improved steadily since that time to claim both of the next two matches.

Sawtell are coming off the bye last round and will be rested and ready to go. Playing at home, the club has planned a strong show of support for the Women’s team on Saturday and the combination of fresh legs and rejuvenated spirits should see the Saints muster one of their best performances of the season.

The Blues will go into the match knowing that a win will seal second spot on the ladder ahead of the Finals. That would be a great achievement for a team in only its first year of operating as a stand alone entity.

Home and away draws to a close as Finals loom 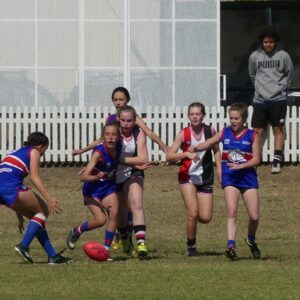 Junior Grand Final time, but not as we know it!