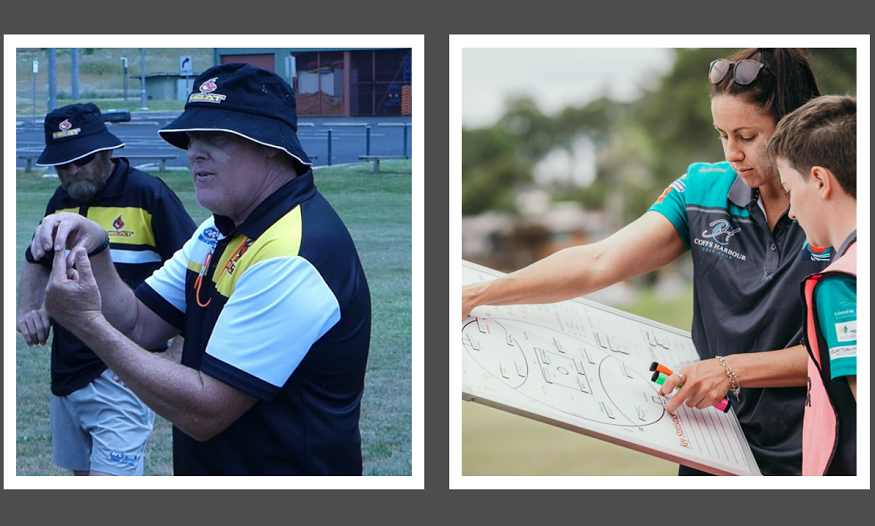 The coaching glass ceiling on the North Coast is about to be smashed as two locals strike out to become the region’s first Level 3 accredited coaches.

Katika Adams and Matt Anderson are leading the way for local coaches as they seek to learn as much as possible about the art and practice of modern coaching so that they can provide the best possible experience for the players they work with.

With access to the Level 4 course limited to coaches seeking to become AFL Senior Coaches, completing the Level 3 will put Katika and Matt at the forefront of coaching at community footy level across the nation.

Katika’s opportunity to take part in the Level 3 course came about after she was selected to take part in the “She Can Coach” program, which is designed to is designed to invest in the development of the next wave of talented female coaches within the state.  The Coffs Harbour Breakers Reserve Grade coach is one of just 14 women who were offered a place in a state-based AFL Level 3 Coaching Accreditation course. The group of 14 includes a number of coaches who are involved at VFLW and AFL Academy levels.

“Coaching is harder than it looks but I was ready for a challenge and to develop a new skill set. My drive and my passion comes from being able to help players reach their full potential. If I can be a part of that by bettering my coaching skills and following a career into the AFLW coaching sphere, I would love that.”

Matt Anderson has an extensive coaching resume with the Sawtell Toormina Saints Senior and Junior clubs, North Coast Force rep teams, and the Northern Heat program. Having held a Level 2 accreditation for several years, he felt the time was right to extend himself further.

“You would normally need to live in a capital city and be involved in an elite program to be able to put the Level 3 learnings into practice. This year the content is much more focussed around the community footy environment and I felt it was a great chance to further develop my coaching skills and knowledge so I can offer even more to the players I’m working with at all levels.”

Paul Taylor, Community Football Manager, said that it was great to see coaches with a thirst for learning. “It was only a few years ago that we didn’t have any coaches accredited above Level 1 in the region, so it’s amazing to think that in a few short years we’re now at the point where we have coaches tackling the Level 3 course.

“All credit to Katika and Matt who are pushing themselves beyond their comfort zone to be the best coaches they can be. Everything they learn from this experience will only benefit the players they coach.”

Following hot on the heels of Katika and Matt are another three local coaches who will be undertaking the Level 2 course.

The biggest single year registration into the course sees Luke Stanford, Shannon Goodenough, and Matt Crawley all enrolled in the program. Each of the three are really excited to get started with the learning so they can put it into practice.

Luke coaches at North Coast PSSA, North Coast Force, and Northern Heat levels. Shannon is the Youth Girls coach at Coffs Harbour Breakers and is stepping up to an Assistant Coach role with the North Coast Academy of Sport, where she’ll work side by side with Head Coach and fellow Level 2 participant, Matt Crawley.

“There’s no doubt that coaches are integral to retaining players within the sport, and developing these players to go further within the game. The bigger the knowledge base of the coach, and the better they are at transferring this knowledge to the players, the more our game grows and improves.

“It’s fantastic that local coaches are no longer seeing coach accreditation as an obligation, but as an avenue to be the best coach they can and support their players’ development to their fullest ability.”