An artist's impression of some of the facilities being constructed at the Wiigulga Sports Complex in Woolgoolga. Image: Coffs Harbour City Council

THE Northern Beaches Blues are moving closer at a rapid rate toward moving to their new home ground in Woolgoolga.

The Blues are likely to be playing home games at the Wiigulga Sports Complex from 2023 now that the amount of work being done on the site west of Solitary Islands Way, opposite Woolgoolga High School, is kicking into gear.

Construction of the $23.1 million project is expected to be completed late next year.

Around 15 local sub-contractors were on site today performing all manner of works under the eye of Lahey Constructions Pty. Ltd which is the principal contractor for the construction of the Sports Complex.

Member for Coffs Harbour Gurmesh Singh said he was proud this exciting project has been owned and driven every step of the way by the local Woolgoolga community.

“The building design reflects our local Indigenous heritage as well as the multicultural mix of the Northern Beaches,” Mr Singh said.

“This new complex is a game changer for the Coffs Coast and I look forward to seeing this dynamic precinct come to life.”

Coffs Harbour City Council Mayor Councillor Denise Knight said the Woolgoolga project has been a community-led and community-focused project from its very beginnings.

“I’m delighted to see that so many local tradies and businesses will be working on the build and fit-out. This is a great example of how major stimulation projects are vital for the local economy as we continue to recover from the pandemic.

“I’m also delighted to see how the Indigneous name for the Wiigulga Sports Complex has been embraced and celebrated by all.

“Huge congratulations must go to everyone involved in this project, in particular the tireless community working group led by Alastair Milroy.”

lTigers and Blues all tied up
Grand Final replay for womenr 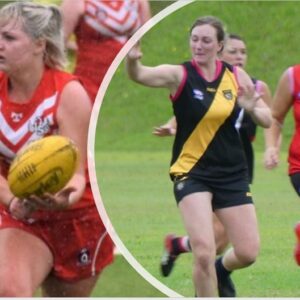