Tigers and Blues all tied up 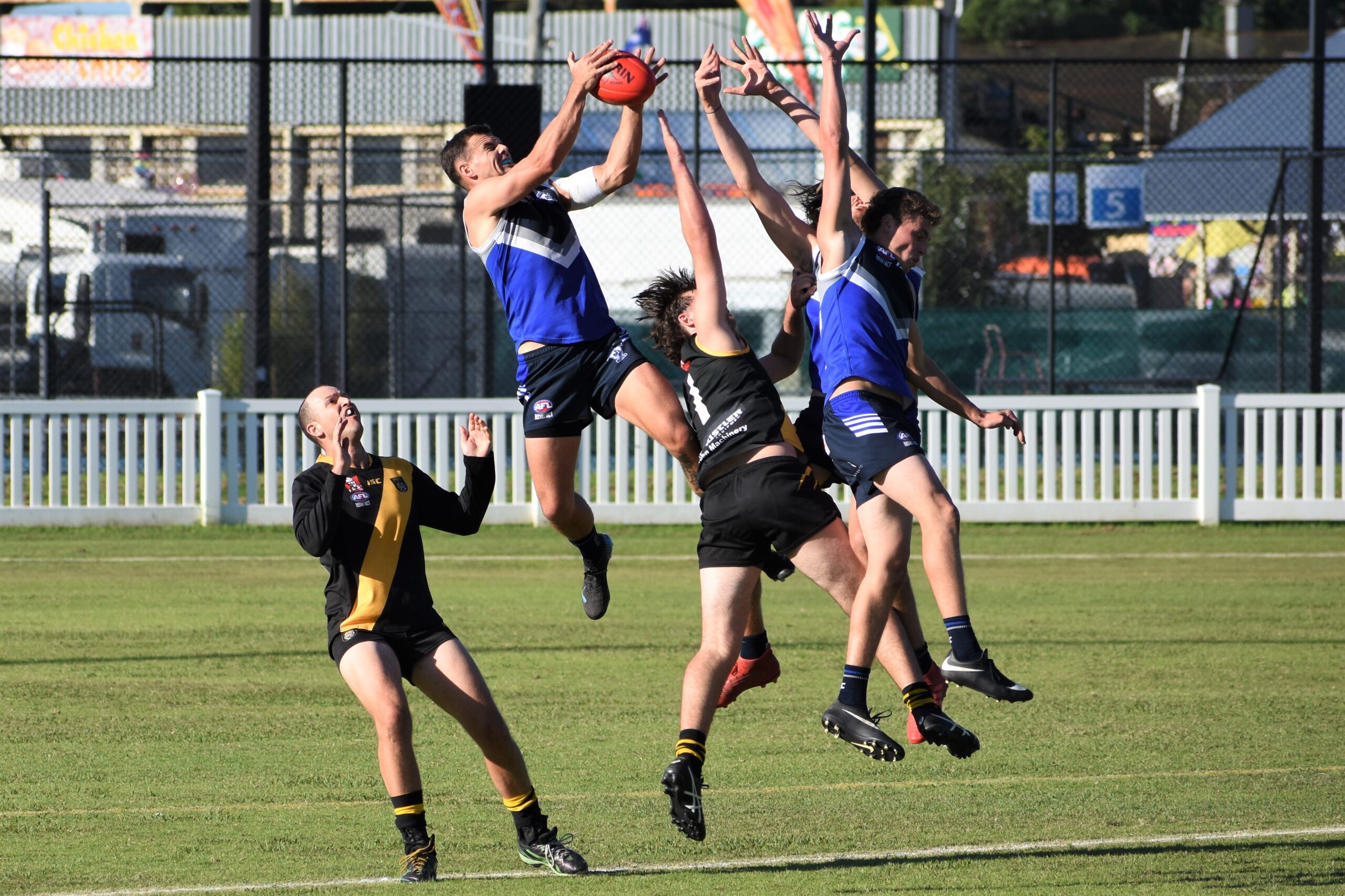 BOTH Grafton and Northern Beaches left Ellem Oval rueing a missed opportunity as they had to settle for a draw in a thrilling opening round clash.

Within 15 minutes of the season start, reigning premier Grafton had eight of the first nine scoring shots as the speed of the Tigers around the packs was causing the Northern Beaches headaches. The trouble was Grafton kicked just one goal in the early onslaught and let a chance to gain a big early lead slip by.

Northern Beaches on the other hand were left to wonder what they could’ve done better in the latter stages of the contest to hold on to the 16-point lead it held at three-quarter time.

Ned O’Neill kicked his third goal for the Tigers with three minutes remaining on the clock to tie the scores up but neither side was able to snatch the lead despite some desperate efforts on very tired legs.

Grafton coach Adi Campbell said it was more than just inaccuracy in front of goal that stopped the Tigers getting all four points.

“Missed opportunities and our work rate around the footy hurt us a fair bit like spreading the ball out of contests, we didn’t spread hard enough,” Campbell said.

“But it was a good fight back. To be almost three goals down in that last quarter and come back and draw it was good but we just ran out of time.”

Blues coach Rory Evans said he was reasonably happy with the result.

“If you said before the game you can come up here and face the premiers from last year and get a draw, the greedy person in me probably wouldn’t have taken it but the sensible person would’ve,” Evans said.

“It’s good to come up here and challenge them and do that.

“I’m not really focussed on the last quarter. I’m probably more really happy with how we responded from the first half of the first quarter.”

Daley Bear looks for a teammate to handball to during the draw the Blues played against Grafton. Photo: Green Shoots Marketing

A COUPLE of goals early in the final quarter by the Coffs Breakers was enough to build up a lead that couldn’t be overcome by Sawtell/Toormina in the local derby.

The Breakers had led throughout the contest but the final margin of 17-points wasn’t a true indication of the contest.

“Even though it was three goals in the end it only felt like it was two points,” Sawtell/Toormina’s playing coach Brandt Lee said.

“We got away with it a little bit. It was a lot closer game than that,” Wilson said.

Michael McMahon’s speed and ball gathering ability for the Breakers proved pivotal in the victory while five goals from the experienced Jay Guthrie had a large impact on the result.

For the Saints, Martin Pettifer and Jordan Perks were a constant threat in front of goal. Pettifer finished the day with four goals and Perks three.

Wilson said it was being able to score goals at vital times that proved the difference.

“I think we had a little bit more fitness at the end and just nailed our chances better when we had them in the last quarter,” he said.

While losing to a cross-town rival is never pleasant, Lee said the Saints can hold their collective heads high.

“We never gave up on the fight and continued to battle all the way through,” he said. THE Lismore Swans announced to the rest of the AFL North Coast that they will be a force to be reckoned with in 2021 after recording a massive 275-point victory over Casino.

The Swans dominated from the get-go and full-forward Andrew Baker was the main beneficiary and he finished with 19 goals next to his name.

Lismore coach Ashley Pritchard admitted never in his wildest dreams did he envisage a final margin of that size.

“It blew me away. I was totally surprised. I was super impressed with how we went about it,” Pritchard said.

“We concentrated on the way we wanted to play and we ran well. We did it from start to finish.”

Pritchard was full of praise for Baker after his big day in front of the sticks.

“He (Baker) is a special player. He’s experienced, played a decent standard of footy up north in Darwin and we’re so happy he’s at our club,” he said.

“He’s not in our leadership group per se but everyone looks up to him. He’s a really nice guy with a terrific family and a valued member of the club.”

Casino coach Rod McKey wasn’t too despondent after being on the wrong end of a large margin.

“We probably had nine of our regular players out but the best thing was we didn’t drop our heads,” he said.

One of the challenges the coach found, apart from a frustration at his player’s lack of manning-up at times, was with the club playing its first match since 2007 he’s still working out what is the best positions for each of his players.

“Early in the game we had some players in positions and it was pretty obvious quickly that they’re probably not suited to playing there,” McKey said.

“We changed the line-up around at times and found better spots for a few of the players and we got better after that. Our third and fourth quarter were our best of the match.” The Casino Lions and Lismore Swans ahead of their historic first match played in the AFL North Coast. Photo: Adrian Etherson Photography

IT took a while for Port Macquarie to get going but when they did, the Magpies were able to kick away from a spirited Nambucca Valley.

Playing in the club’s first senior match since 2011, Nambucca Valley started the better of the two teams and Magpies captain Kye Taylor admitted to having some concerns.

“We started slowly and Nambucca Valley was winning it in tight with their big bodies around the contests,” Taylor said.

“As the game went on we were able to get our run and carry part of the game into gear, especially in the third and fourth quarters. That got us over the line a bit.”

Taylor said the 37-point win over the Lions was a great start to the season for Port Macquarie as the Magpies were missing four or five regular senior players from its line-up. He added that situation created an opportunity that a swag of youngsters took by the horns.

“It’s a pretty new team we’ve got this year and we had five or six 17 year-olds that played their first game,” he said.

“That was exciting and they’re only going to get better from here.”

Two debutants who impressed the skipper were Will Oram and the almost two metre tall Jarvis Page who both managed to kick a goal each in the win.