40th season set to be biggest and best yet!

AFL North Coast is celebrating its 40th season in style, doubling its Senior Men’s competition to eight teams, whilst the Women’s competition grows from three teams to seven.

In the Senior Men’s, Lismore Swans and Casino Lions are new to the league in 2021, whilst Northern Beaches Blues and Nambucca Valley Lions have been promoted from Reserve grade. All squads are looking to topple reigning premiers, the Grafton Tigers.

In the Women’s Grade, Port Macquarie Magpies return after a 12 month break, Lismore Swans are new to the League, and both Grafton Tigers and Nambucca Valley Lions will field teams for the first time. Coffs Harbour Breakers are aiming to be the first team to claim back to back premierships but know that the other six teams are all gunning for them.

Community Football and Competition Manager for AFL North Coast, Paul Taylor, said clubs are looking forward to a larger playing cohort in 2021. “Everyone is excited to expand the competition in this season,” Mr Taylor said. “Growing AFL North Coast means we get to travel to some of the most beautiful parts of Australia. It’s going to be great fun.”

In addition to the Senior Men’s and Women’s divisions, the Reserve Grade competition will comprise five teams, whilst Under 17 sees the return of Port Macquarie Magpies to increase team numbers to four. To add variety to the Under 17 competition, teams will engage in “cross conference” style fixtures and will each play three matches against teams from AFL North West.

More than 1,100 women, men, girls and boys play in the AFL North Coast league. This has grown from 500 over the past six years, highlighting the ongoing popularity of the game. In 2021, the Senior Competition will feature 24 teams, which represents incredible growth considering that in 2017 just 10 teams competed across the three grades.

Round 1 of the Senior Competition is the ANZAC Round on Saturday 24 April. Draws for all grades are now available via this website.

On Saturday 17 April a Festival of Footy pre-season carnival will be held featuring all 8 Senior teams, all 7 Women’s teams plus special guests Ballina Women. Matches will be played across three grounds at C.ex Coffs International Stadium and Leisure Park from 10:25am to 5:00pm. The draw for the Festival of Footy is available here. 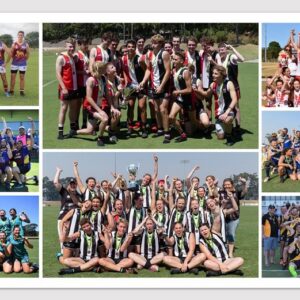