Nambucca Valley Lions haven’t won an open age title in any of their incarnations in the competition, whilst Coffs Harbour Breakers are yet to be crowned Premiers of Reserve Grade. That will all change for one of these teams after Saturday’s Grand Final.

The Lions have been a revelation in their return to the competitive fold after an eight year absence. That they have gone through the season undefeated isn’t a surprise considering that they have three members of the recently announced Team of the Decade in Leif Stuart, Aaron Clarke, and Jimmy Angel, plus recent Senior grade players in Aaron Boatfield and Joe Drage.

However, very few teams win flags off the back of four or five players only and it’s the depth that the team possesses that has been key to their success. Former Victorian Jake Hare has dominated matches, Haydn Suridge brings athleticism in his first year in the code, and Jacob Welsh offers plenty of goals up front highlighted by his six goal bag in the Semi.

In their last incarnation, the Lions won two Under 18 titles but are yet to claim an open age crown. Success on Saturday would not only break that duck but would also set the club up for further growth.

The Breakers Reserve Grade side has made it to this stage of the season on a number of occasions but is yet to get its hands on the Premiership Cup.

Even in his forties, Brad Giri is one of the smartest footballers going around and offers plenty of threat up forward, but his entry to the match could be delayed due to his role as Women’s coach. Aaron Crolla adds grunt to the midfield and is always a threat with a long bomb. Josh Hunt is both fit and fast and will relish the wide open expanses of the Stadium, especially as the game goes on and opposition legs grow tired.

Whilst many players in the club have juggled their time between the open age grades, Brayden Coad, Will Buckingham, Cody Woods, Rohan McMahon and Cooper Patricks have been the mainstays that coach Benny Watson builds his team around.

Nambucca comfortably won both clashes this season between the two teams so the Breakers know they have their work cut out if they are to prevail in the biggest match of the year.

The Reserve Grade Grand Final is at 2:00pm on Saturday 10 October at C.ex Coffs International Stadium. Tickets must be pre-purchased through the Eventbrite website.

A preview of the Under 17 Grand Final will be online this afternoon, whilst previews of Women’s and Seniors will appear tomorrow. 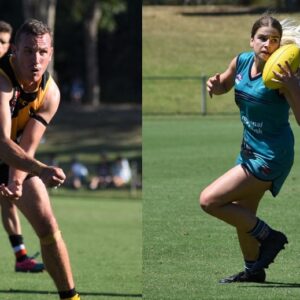